Chefs for Change Chefs Jamie Oliver, Alice Waters, and Anne Cooper team up with The California Endowment to turn up the heat on healthy food and clean water access.

They came, they saw, they ate, they encouraged meaningful, healthful change. It was a powerful day when renowned chefs and healthy food activists Jamie Oliver, Alice Waters, and Anne Cooper came to Sacramento to support key healthy food and clean water initiatives with The California Endowment.

The chefs met with top leaders in the state capital, visited Pacific Elementary School in south Sacramento, and even participated in a Reddit Ask Me Anything (AMA) where they discussed the launch of the Food Truth Coalition.

Here are the highlights: 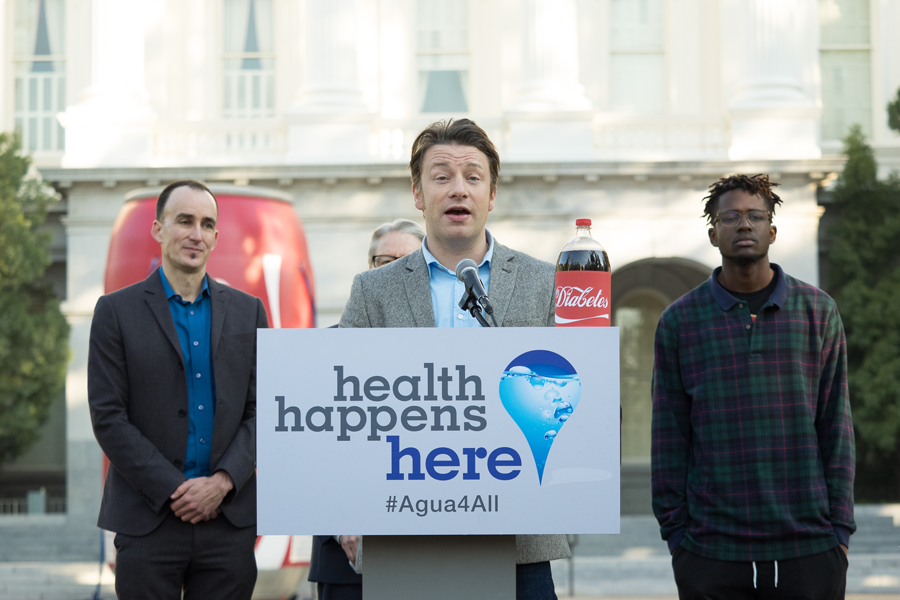 Jamie Oliver kicked off the day’s events with a press conference on the steps of the state capital, joined by (L-to-R) The California Endowment Senior Vice President Daniel Zingale, California State Senator Bill Monning, and Youth Speakers performer Obasi Davis. Oliver partnered with The California Endowment in launching the #Agua4All initiative, which aims to provide 120 clean water drinking fountains in Coachella Valley, Kern County, and beyond.

The reason for this is simple: 2.5 million students do not have access to clean drinking water at school meals. Often, they substitute sugary soda or sports drinks for water, which increases their risk of Type II Diabetes by at least 55 percent when consumed daily starting in childhood. [Indie Go-Go] 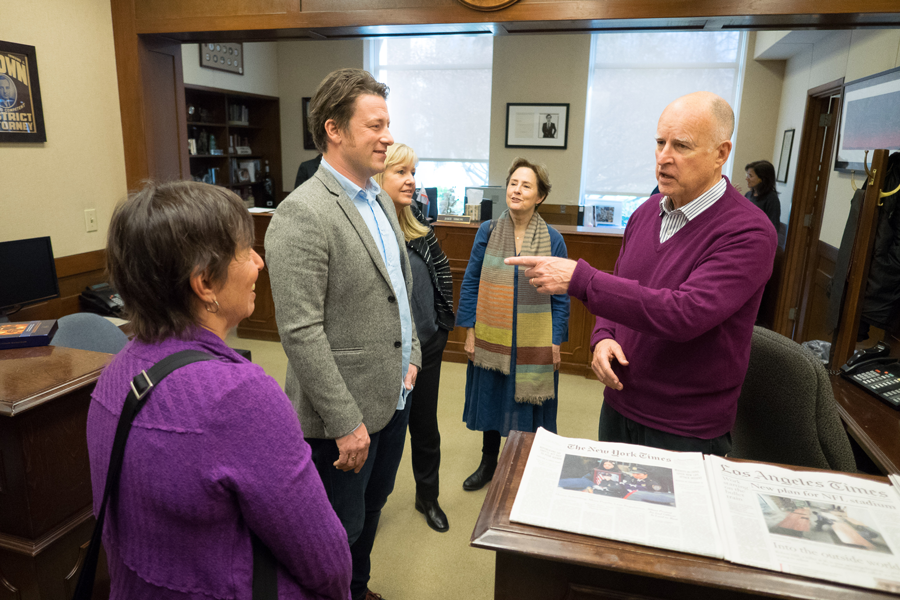 The chefs met with Governor Brown and other elected officials to discuss #Agua4All and the Food Truth Coalition. [Facebook Gallery] 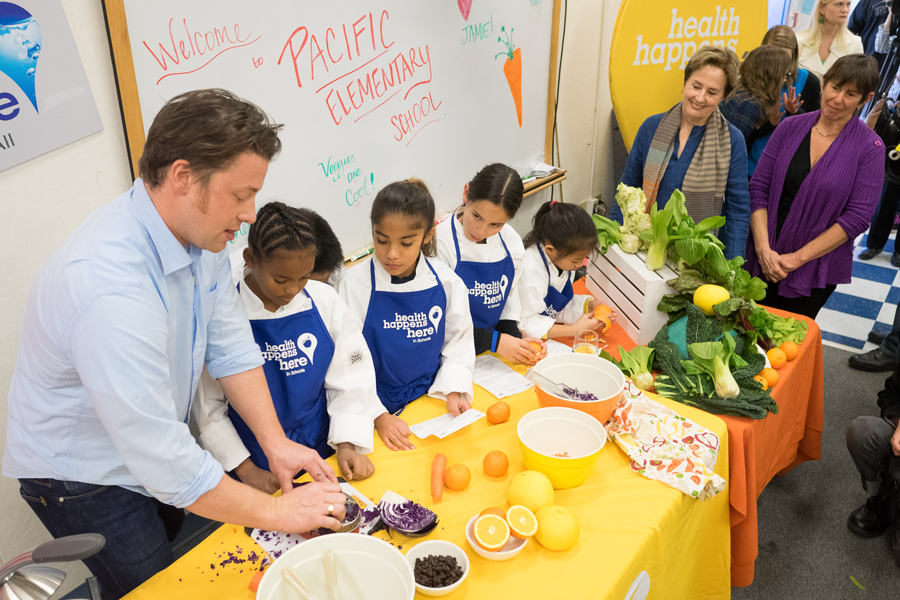 While in town, the chefs met and cooked with elementary students involved with The California Endowment-supported Food Literacy Center program at Pacific Elementary. Students and “Food Literacy Geniuses” made lunch for their celebrity guests, and the students showed off what they’ve learned during a cooking demonstration with Chef Oliver. [Food Literacy Center] 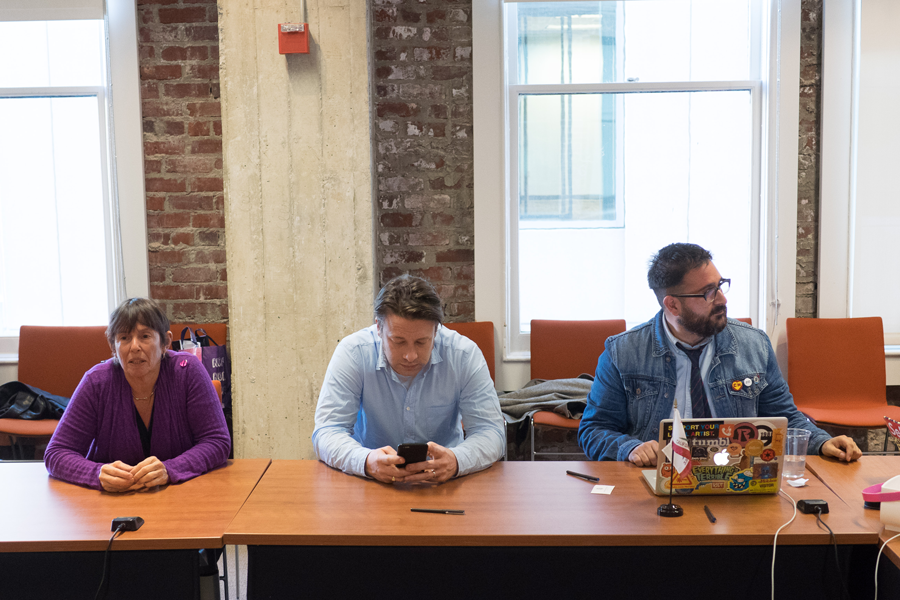 The chefs offered some healthy digital dessert in the form of a Reddit AMA (Ask Me Anything) focused on the Food Truth Coalition. Jamie Oliver said of the campaign to force food companies to come clean about their health-harming products: “Not lying, honesty. If it says healthy and it has 4 ingredients that are chemicals and only 2 or 3 that are good food, that’s not healthy. That’s food truth.”

When asked what the ultimate victory of the food revolution would look like, each chef had a great answer:

Jamie Oliver: That a young parent no matter what age, wealth, color, knows how to cook a delicious meal for their family that nourishes them without monetary burdens.

Alice Waters: Free school lunch from organic, local people who take care of the land and nourish the kids. Let’s make that global! 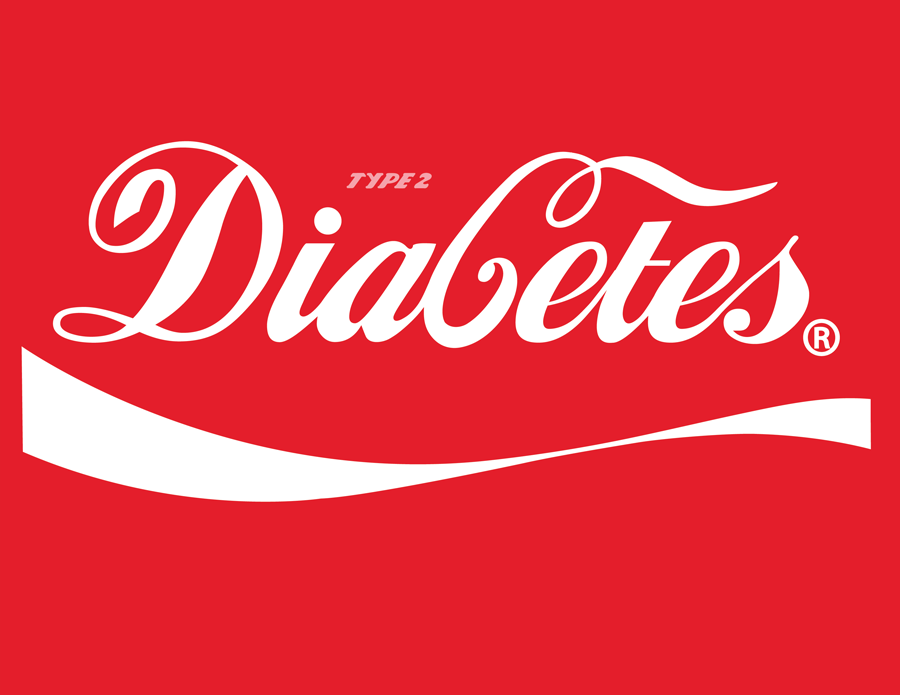 Punctuating the day were Type II Diabetes soda bottles of all sizes. These highlight the hidden truth behind the labels of some of our most iconic junk food and drink brands.