Why We Need to Invest in Prevention

The Institute for Medicine today published a discussion paper and call to action authored by the Prevention Institute’s Larry Cohen and Dr. Anthony Iton, senior vice president of The California Endowment. The paper, Closing the Loop: Why We Need to Invest—and Reinvest—in Prevention, is aimed at catalyzing conversation about how health care and prevention are paid for. Read the full paper here.

There’s a growing consensus among policymakers and health planners that if we want to improve health outcomes and lower costs we must change community conditions in ways that support health and prevent illness and injury before they occur. In their article, Larry and Tony make the case for the creation of sustainable funding mechanisms that support prevention efforts. They argue that we need to “close the loop” by ensuring that when prevention efforts DO save money, substantial portions of that money get plowed back into prevention.

The Closing the Loop concept relates to a model that Prevention Institute has been developing called Community-Centered Health Homes. It encourages healthcare providers to engage with their community to improve local conditions that affect health, as well as delivering high-quality care.

The following is drawn from the IOM article:

What would you do if an investment you made returned 5,500 percent? You’d probably look for ways to reinvest most of it.

From 1989 to 2008, the state of California invested $2.4 billion from cigarettes taxes and into the California Tobacco Control Program, which spent the money on efforts to reduce smoking—from helping community coalitions pursue no-smoking policies to underwriting media campaigns. The $2.4 billion investment saved $134 billion—that’s the 5,500 percent return—from reduced medical expenditures that would otherwise have been needed to treat smoking-related illness, a UC San Francisco analysis found.

I (Larry Cohen) worked on the nation’s first multicity no-smoking laws, and I’m proud we reduced smoking, saved lives, and changed norms. This return on investment is great but it raises a question: Given how fruitful the investment, why hasn’t more money been devoted to prevention? Very little of the $134 billion in savings—or of the millions raised from legal settlements with tobacco companies—has gone into further efforts to prevent smoking.

I (Tony Iton) am a physician who worked successfully to ban smoking in bars and restaurants in Connecticut and now works to reduce the shocking and preventable life-expectancy differences among California neighborhoods. The health challenges we now face require us to apply the vast prevention knowledge we’ve acquired. We don’t have to wait for people to become sick before we act.

We believe it’s time to close the loop to ensure that two things happen. First, when funds are generated through taxes, fees, or fines connected to behaviors such as smoking, driving, or drinking, a major portion of that revenue should go to reducing the harms that stem from those activities. Second, when prevention efforts are shown to save money, a substantial part of that bounty should be reinvested in prevention. Think of the money and lives that could be saved if a significant piece of the $134 billion saved by tobacco-control efforts went to reduce tobacco use among young people or in communities where smoking rates remain high.

Health care expenditures cost our nation $2.8 trillion a year and account for one of every six dollars of GDP. There is a growing consensus that if we want to reduce health care spending, we must reduce rates of preventable conditions that drive that spending. To do that, we need new funding models that incentivize prevention within our health care system and support community-level prevention efforts.

Here are the key elements of a Closing the Loop strategy:

•    Reinvest: Establish a participatory reinvestment process, based on agreed-upon criteria and strategies that promote health and wellness, further reducing costs and savings lives. 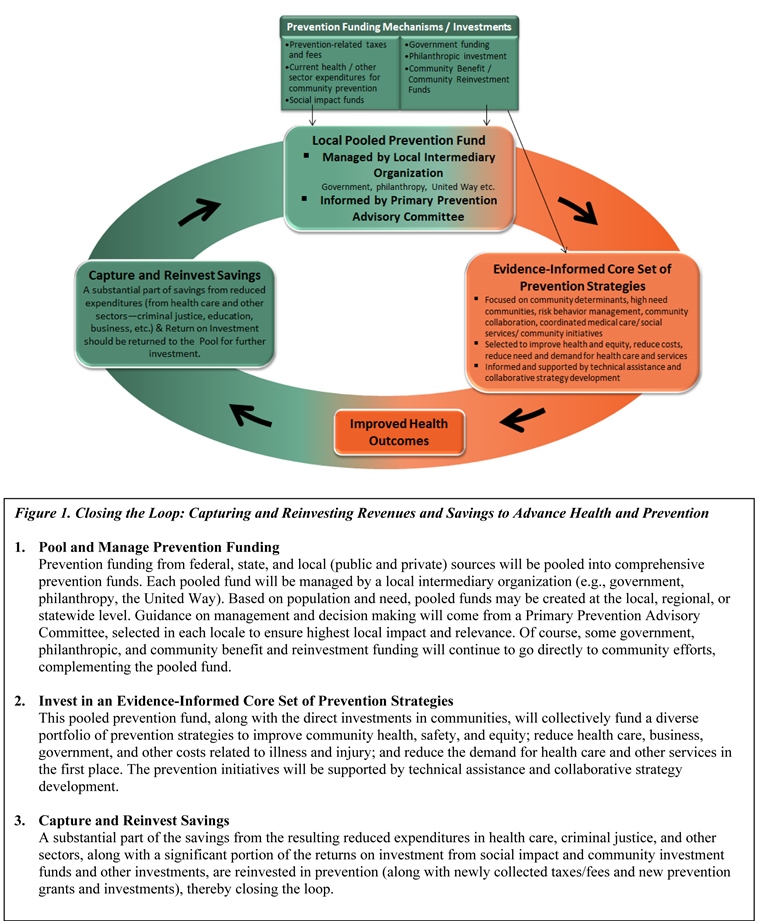