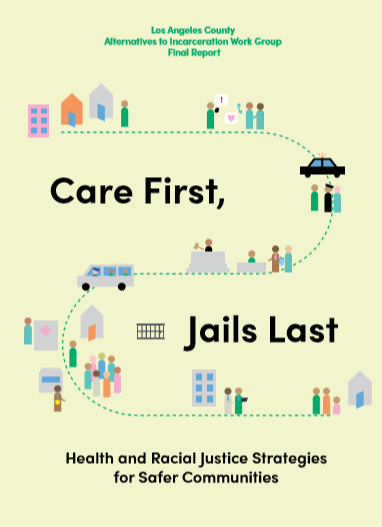 This week the Los Angeles County Board of Supervisors will consider an opportunity to put rocket fuel into justice reform efforts across the county.

The report, entitled “Care First, Jails Last,” is the result of an invitation by the Board of Supervisors to craft recommendations to assert health care-and-services as the first option, and reserve jail as the last resort for those struggling with mental illness, addiction, and hopelessness.  The report was developed by the Alternatives to Incarceration (ATI) Work Group, a blended group of 25 county officials, civic leaders, and community representatives who worked together for nearly one year.  I had the honor and privilege to serve as Chair for the ATI group.

LA County is home to the nation’s largest jail system, housing roughly 17,000 inmates on any given day.  Racially, they are disproportionately black and brown – and this disparity is exacerbated among the more than 2000 women inmates.  Nearly one-third of the 17,000 inmates are diagnosed with a serious mental health disorder, and a recent RAND study revealed that 60 percent of these patients could be treated in community settings rather than behind bars.  Nearly 60 percent of released inmates struggle with a substance abuse issue.

Like most of the nation, our jails have emerged as a de-facto-treatment-system – and not very good ones.  Our nation has learned, through a racialized lens, how to criminalize mental illness, addiction, and hopelessness.  We need to un-learn this phenomenon in policy and in practice.  The ATI Report being delivered this week shows how.

Prior to delving into the content of the recommendations, a word about the process.  The County Supervisors, in their wisdom, did two things to democratize the process of developing recommendations.  The first is community representatives – including persons impacted by the justice system directly – were named to the ATI Group.  Secondly, all meetings were open to the public.  Members of our ATI Group conducted 56 meetings over the past year, most of them in community settings and involving more than 1000 participants.  Participants ranged from Public Defenders and county health officials, to law enforcement, to formerly incarcerated persons, mental health advocates and gender justice and racial justice advocates.  The meetings were vibrant, and never boring.

Professor Kelly Lytle Hernandez of UCLA served as an ATI member, and enlightened our group about the roles that bigotry and racial injustice have played in the 100+ year history of incarceration in LA County; the very first constructed county public facility, in fact, was a jail.  Professor Lytle Hernandez was  recently named a MacArthur Foundation Fellowship awardee, as a result of her historical work on racism in the justice system, and her highly regarded “Million Dollar Hoods” initiative.

The ATI report consists of 114 recommendations arrayed across a set of “intercept” points – these eight “intercept” points represent opportunities to replace a law enforcement/courtroom/booking interaction with a behavioral health, supportive housing, or supportive services intervention.  Transforming our hyper-incarcerated justice system into a “care first” model would mean, for example:

Tracking the progress in such a system: teams of community health workers and researchers from impacted communities who are trained to gather data about accessing services and treatment effectiveness.  Racial disparities would be tracked and measured as well.

This, in essence, is what the 25 members of the ATI Work Group – and the hundreds of community leaders and advocates who participated in the process – have invited the County Board of Supervisors to embrace as the new vision of a “Care First, Jail Last” system of care.

The ATI report – infused with the combined input of health, mental health, law enforcement, advocates for change, and impacted persons – provides a roadmap to de-carceration efforts for LA and the nation.  But beyond that, it sends a powerful message that the matter of public safety in our nation requires a new narrative: no longer should “public safety” be equated with police patrols, courtrooms, and jails.  The narrative of Public Safety must be re-imagined to Community Safety, with care and services as the first option, and jail as the very last resort.

We are advancing
health and racial
equity in California

Our health system works best when every Californian has access to quality and affordable health care.

Re-imagining a criminal justice system that centers on prevention and healing.

Our communities and neighborhoods thrive when policies advance health and racial equity for all Californians.

Building Power in resilient communities across the state for a stronger California.

Explore Our StoryAbout our Grant Making